Radar is a target detection system that uses radio waves to identify the range, altitude, direction, or speed of moving and fixed targets such as aircraft, ships, spacecraft, guided missiles, motor vehicles, weather formations and terrain.The radar dish—or antenna—transmits pulses of radio waves in the microwave range which bounce off any object in their path. The object returns a tiny part of the wave’s energy to the dish or antenna which is usually located at the same site as the transmitter. The information provided by radar includes the bearing and range—and therefore position—of the target. It is thus used in many different fields where the need for such positioning is crucial.

The first use of radar was for military purposes to locate air, ground and sea targets. This has evolved in the civilian field into applications for aircraft, ships and roads.

In aviation, aircraft are equipped with radar devices that warn of obstacles in or approaching their path and give accurate altitude readings. They can land in fog at airports equipped with radar-assisted systems, in which the plane’s flight is observed on radar screens while operators radio landing directions to the pilot.

Marine radars are used to measure the bearing and distance of ships to prevent collision with other ships, to navigate, and to fix their position at sea when within range of shore, or other fixed references such as islands, buoys, and lightships.

Undoubtedly, many of us are intimately familiar with radar guns used by police forces to monitor vehicle speeds on the roads.

Radar has invaded many other fields. Meteorologists use radar to monitor precipitation. It has become the primary tool for short-term weather forecasting and to watch for severe weather such as thunderstorms, tornadoes, and hurricanes. Geologists use specialized ground-penetrating radars to map the composition of the Earth’s crust. The list is getting longer all the time.

Conical Scan systems send out a signal slightly to one side of the antenna’s boresight and then rotate the feed horn to make the lobe rotate around the boresight line. A target centered on the boresight is always slightly illuminated by the lobe and provides a strong return. If a target is off to one side, it will be illuminated only when the lobe is pointed in that direction which results in a weaker return.

Monopulse radars are similar in general construction to conical scanning systems but with one more feature: instead of sending the signal out of the antenna “as is”, they split it into parts and then send pulsed signals out at slightly different directions. When the reflected signals are received, they are amplified separately and compared to each other; this indicates which direction has the stronger return and therefore the general direction of the target relative to the boresight. Since this comparison is carried out during one pulse, changes in target position or heading have no effect on the comparison.

Making this comparison requires that different parts of the beam be distinguished from each other. This is achieved by splitting the pulse into parts and polarizing each one separately before sending them to a set of slightly off-axis feed horns. This results in a set of lobes overlapping on the boresight. These lobes are rotated as in a normal conical scanner. The two received signals are separated again, one of them is inverted in power to obtain the difference and the two are summed. If the target is to one side of the boresight, the resulting sum will be positive; if it’s on the other, negative.

This system can produce a high degree of accuracy if the lobes are closely spaced. While conical scanning systems generate pointing accuracy on the order of 0.1 degree, monopulse radars improve this by an order of magnitude or better. This amounts to an accuracy of 10 m at a distance of 100 km.

Jamming resistance is also improved over conical scanning systems. Filters can be inserted to remove any signal that’s not polarized or polarized in one direction. In order to confuse such a system, the jamming signal would have to duplicate the polarization and the timing of the monopulse radar.

This is a real-life example of the signal processing involved with a typical monopulse radar application. As shown in Figure 3, the system uses a multi-element antenna where the received signals consist of three types: Azimuth, Elevation and the sum of these two. The signals to be digitized and processed are as follows:

For our next task, we’ll create some radar signals using the Pentek Model 71621 XMC Transceiver module. As shown in Figure 8, the signal waveform is created by the user as a block of digital amplitude samples and loaded across the PCIe interface into the module’s QDR or SDRAM memory. It is then transferred to a waveform engine IP core installed in the Virtex-6 FPGA. The engine delivers the waveform samples to the DUC and the D/As. We can create multiple modes such as triggered, gated, continuous loop, delayed, and so on. 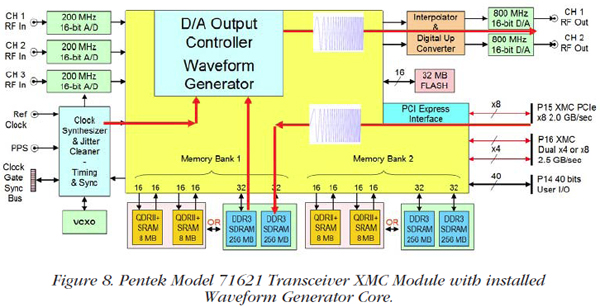 As shown in Figure 9, we chose the complex baseband signal to have 40 MHz bandwidth. When translated to the 140 MHz IF, the 40 MHz signal extends from 120 MHz to 160 MHz. The output sampling frequency must be at least twice the 160 MHz highest frequency, or 320 MHz minimum. Let’s choose 400 MHz to be on the safe side, and use the interpolation filter and DUC to translate the baseband to the IF frequency.

Typical parameters for the D/A Output Controller Table are given in Table 1. This table controls the D/A waveform generator and is used to store these parameters in different memory locations. The table entries specify the starting address and waveform length as well as triggering, looping, delays, etc. for the various waveforms to be generated. Each table entry represents a different waveform scenario. 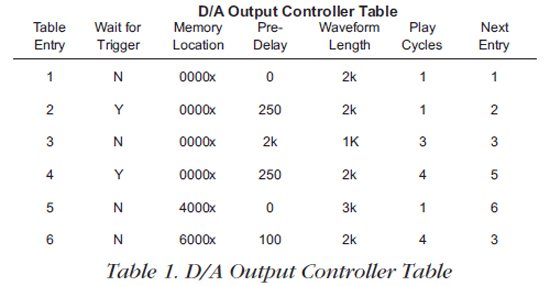 Figure 10 shows three typical waveforms. Waveform A shows a continuous waveform where the generator runs continuously and repeats it in an endless loop. Waveform B is a triggered single and it generates one record for each input trigger. Finally, waveform C is a pre-delay single where the generator waits for a specified delay and then outputs the waveform once. 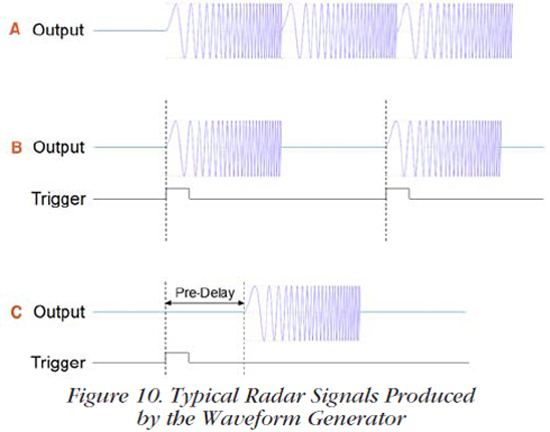 To process the received radar data, we will utilize synchronous sampling where we collect A/D samples simultaneously on all three channels. The data collection must be timed precisely to the outgoing trigger pulse. The range gate specifications are precalculated and must be preloaded for fast access.

Just as in the case of the D/A Output Controller Table, the user simply fills in the A/D Input Controller Table such as the one shown in Table 2. The table parameters control the timing of the range gate, specify the memory location for storing the A/D data, the number of samples to store, and the parameters that control triggering, delays, chaining, etc. 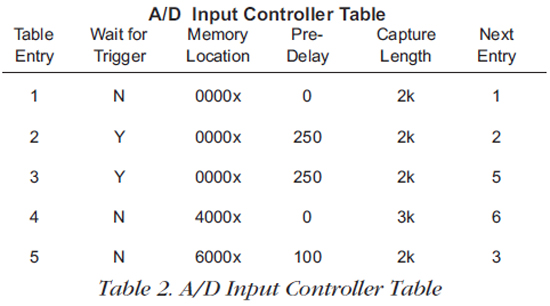 Figure 11 is similar to Figure 4, except here we have superimposed the D/A Output Controller and the A/D Input Controller table entries as they relate to the generation of the outgoing radar pulse and acquisition of the signal returned from the target. The range is the same as given for Figure 4, namely, targets between 15 km and 45 km from the radar location. 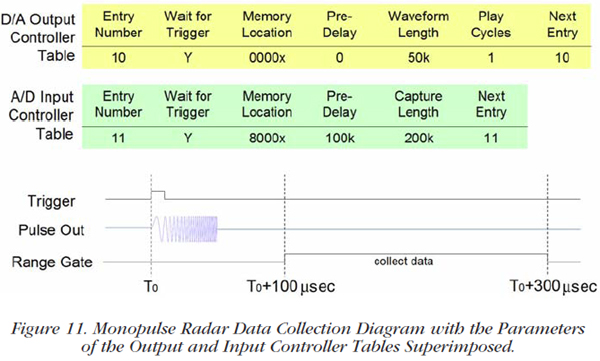 Radar waveform generation uses a D/A controller engine with a simple parameter table. It creates multiple waveforms with programmable delays and lengths. The wideband DUC upconverts the digital baseband waveform to 140 MHz IF and the 400 MHz, 16-bit D/A delivers 140 MHz IF signal with 40 MHz bandwidth.

Made by Expert Creative

Ryan was raised in Mesa, Arizona, attended Gilbert schools and graduated from ASU in 2006 with a Bachelors in Interdisciplinary Studies. He went on to complete his MBA at the University of Phoenix Campus in Mesa. Prior to VMA, Ryan worked 5 years as a consumer sales consultant and then 5 years as Program Analyst at Orbital Sciences, now Northrop Grumman.   Outside of the office, Ryan loves to spend time with his wife, 12yr old daughter and twin 7 year old boys. Ryan loves to get outdoors to hunt & fish as often as possible, serves frequently with kids and adults at church and enjoys quality BBQ time with his friends and family. Ryan is located in our Arizona office.

Natalie Myers joined Vic Myers Associates in September 2021 and is excited to be part of the team. She received her bachelor’s in business administration from the University of Phoenix and prior to her position as Inside Sales Administration she worked in the Hospitality Industry for over 15 years as a Senior Sales Administrator. In her free time, she enjoys spending time with her husband, daughter, family and friends along with watching sporting events, traveling, hiking and cheering on her daughter in dance and basketball! Natalie is located in our Arizona office.

Can’t find what you’re looking for?